A cookie is information stored on your computer by a website you visit. Cookies often store your settings for a website, such as your preferred language or location. This allows the site to present you with information customized to fit your needs. As per the GDPR law, companies need to get your explicit approval to collect your data. Some of these cookies are ‘strictly necessary’ to provide the basic functions of the website and can not be turned off, while others if present, have the option of being turned off. Learn more about our Privacy and Cookie policies. These can be managed also from our cookie policy page.

IE10 and below are not supported.

Why has the name for the project area changed from “Forrestfield North” to “High Wycombe South”?

The name “High Wycombe South” will recognise that the precinct is wholly located within the suburb of High Wycombe. In addition, the State Government released a community survey for the naming of the new train station. On 26 June 2020, it was announced that the station was to be named ‘High Wycombe Station’.

What areas of the High Wycombe South project area will be impacted by this Local Structure Plan amendment?

The High Wycombe South Residential Precinct project area is generally bounded by Poison Gully Creek to the North, Roe Highway to the West, Sultana Road West to the South and Milner Road to the East (see image below for locality plan) 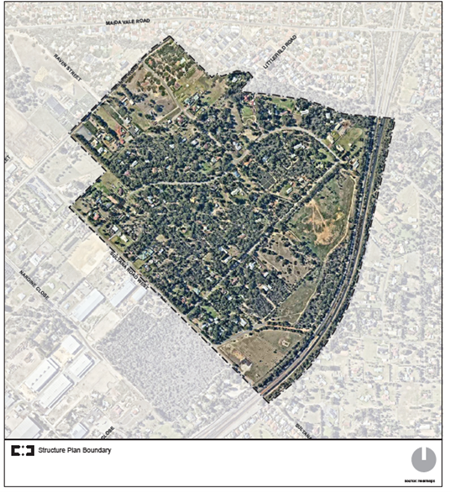 What is a Local Structure Plan?

The current Residential Precinct LSP was approved by the Western Australian Planning Commission on 27 July 2020. The current proposal is an amendment to the approved LSP.

Why is an amendment to the approved Residential Precinct Local Structure Plan Required?

The current Residential Precinct LSP was approved by the Western Australian Planning Commission on 27 July 2020.

In 2020 the City and its consultants commenced the preparation of technical studies required to inform a Development Contribution Plan (DCP) for the project area. These technical studies outlined the need for several modifications to the approved Residential Precinct LSP including a connection from Raven Street to the TOD Connector Boulevard, a change in the road reservation width of the TOD Connector Boulevard, and a modification to the density ranges of the Residential Precinct LSP.

In early 2021 the City in consultation with state agencies Metronet and DevelopmentWA established the principles guiding the spatial layout of the TOD Precinct Activity Centre Structure Plan. This process made it clear that additional amendments to the Residential Precinct LSP were required including a modification to the boundary of the Residential Precinct LSP to be consistent with the Redevelopment Scheme boundary, relocating the TOD Connector Boulevard, and associated adjustments to Local Open Space.

What are the proposed amendments to the approved Residential Precinct Local Structure Plan?

A summary of the proposed amendments to the Residential Precinct LSP are as follows:

Why are the density ranges for the Residential Precinct proposed to change?

To inform the preparation of the TOD ACSP, and future contribution arrangements for the funding of infrastructure in the High Wycombe South precinct, dwelling and population yields analysis was undertaken to inform key inputs into the planning process

The yields analysis calculated a development yield and population forecast in a low, medium and high scenario. In addition, the analysis calculated the anticipated build out timeframe in each scenario. In consultation with the State Government, the City’s Consultants and the State’s Consultants, it was determined the ‘medium’ yield scenario should be adopted. This scenario projected a full build-out of 2,417 dwellings by 2050.

This timeframe was considered appropriate as the planning framework for the precinct is well progressed, with an approved DSP and supporting reports such as a Local Water Management Strategy (LWMS) in place. The planning for this area has been in progress for the past decade and it is understood there is interest from the development industry to assemble land to resolve issues around fragmented land ownership. In addition, by way of comparison, a similar sized development area in the City (Cell 9 – Wattle Grove) has taken approximately 20 years to develop to 70% build out.

Following the consensus between both agencies on the medium yield scenario, it became apparent that the previously approved LSP density ranges were visionary, and that the intention to facilitate a higher density apartment product was unlikely to be commercially viable until the medium to long term. If the density ranges were retained as approved by the WAPC in July 2020, the LSP will not communicate the most likely density and type of residential development to the development industry, and the density ranges would not reflect the yields assumptions that underpin infrastructure analysis for the precinct.

In response to the above findings of the yields analysis, the three density ranges of:

Are proposed to be broadened into the following two density ranges:

With the following notation to be incorporated within the map legend to encourage a high standard of built form and enable flexibility for developments that may benefit from a higher density coding.

“* applications for subdivision or development at the higher end of the density band shall be assessed against a range of criteria. Refer to Part One, Section 4.2 of the Local Structure Plan.”

Why is an extension of Raven Street to the TOD Connector/Brae Road Proposed?

The new road extension of Raven Street between the TOD Connector Boulevard / Brae Road through to Milner Road and ultimately Maida Vale Road is designated as a Neighbourhood Connector. This is a 24.4m wide road reserve which will need to be considered as part of any future subdivision of the land. The land requirements, including the future purchase or ceding of this land, will be further considered as part of a future DCP.

The extension of Raven Street is integral to the coordination of the TOD and Residential Precincts and the long-term management of traffic through the project area. The connection creates a significant neighbourhood link that allows for the movement of vehicles, cyclists and pedestrians from the Residential Precinct through to the TOD Precinct Activity Centre and the High Wycombe Station multi-storey carpark.

Why does the TOD Connector need to be realigned?

The realignment of the TOD connector is required to ensure the alignment of the road network geometry of the TOD Connector outlined in the TOD ACSP, and in the Residential LSP connect. The design and requirement for this modification are direct outcomes of traffic modelling and reporting undertaken by the Traffic Consultants involved with the LSP preparation.

My land is designated for infrastructure purposes, will I get a fair value for my land at the time of acquisition?

A land valuation, prepared by a licensed Land Valuer, will be prepared to inform the DCP and will be reviewed annually. At the time of acquisition of infrastructure identified in, and funded by, the DCP, an independent Land Valuer will undertake a valuation of the portion of land to be acquired. If you do not agree or are unhappy with the value provided, you have the opportunity to consult a land valuer of your own to undertake a separate valuation. If the two valuations are different it is normal practice for two valuers to confer and attempt come to an agreement on land value. The particulars of this process will be further outlined within the DCP.

I live within the project area - when and how will I have the opportunity to comment?

Submissions regarding the proposal can be lodged Online via the City’s website - https://engage.kalamunda.wa.gov.au/, via email to enquires@kalamunda.wa.gov.au or via post to City of Kalamunda PO BOX 42, Kalamunda WA 9626 by close of business 4 January 2022.

In addition, the City will be holding a drop-in community information session on Wednesday 24 November 2021 from 4:30 – 6:30pm at the City’s Administration Centre Function Room (2 Railway Road, Kalamunda – access from the Railway Road side of the building). The purpose of this informal session is for City staff to assist you in interpreting the plans/proposal, and to answer any questions you may have.

To provide you with further information or to answer any individual queries you may have on the draft LSP amendment and how it applies to your property, we encourage you to take part in a one-on-one consultation with a City officer.  The City also encourages landowners who are affected to engage their own independent planning advice and to provide feedback and comment through appropriately qualified personnel

Following the Gazettal of the Metronet East Redevelopment Scheme in May 2021 over the High Wycombe South TOD Precinct, Development WA became the planning authority.

On 12 October 2021 the Council considered the TOD ACSP for the purpose of submission to DevelopmentWA for assessment, consultation, and determination.

Accordingly, DevelopmentWA will be releasing communications to TOD Precinct landowners on when the consultation period will open for the ACSP and the methods by which comments can be submitted.

Where can I get ongoing up to date information on this project and the overall High Wycombe South project?

To subscribe to the monthly newsletter please go to the following link: http://eepurl.com/dOW__5

In addition, information can be found under the ‘Planning Projects’ section of the City’s Website via https://www.kalamunda.wa.gov.au/building-development/planning/projects/forrestfield-north

What is next for the overall High Wycombe South Project

The City is in the final phases of preparing a DCP for the High Wycombe South project area. Due to delays in receiving critical data from State Agencies, this item was unable to be considered at the same time as the ACSP and Residential Precinct LSP Amendment.

Further updates on the progression of the DCP will be provided through the High Wycombe South monthly newsletter.

Who can I contact if I have further questions?

Please contact the City’s Strategic Planning Team on 9257 9999 or via email on enquiries@kalamunda.wa.gov.au